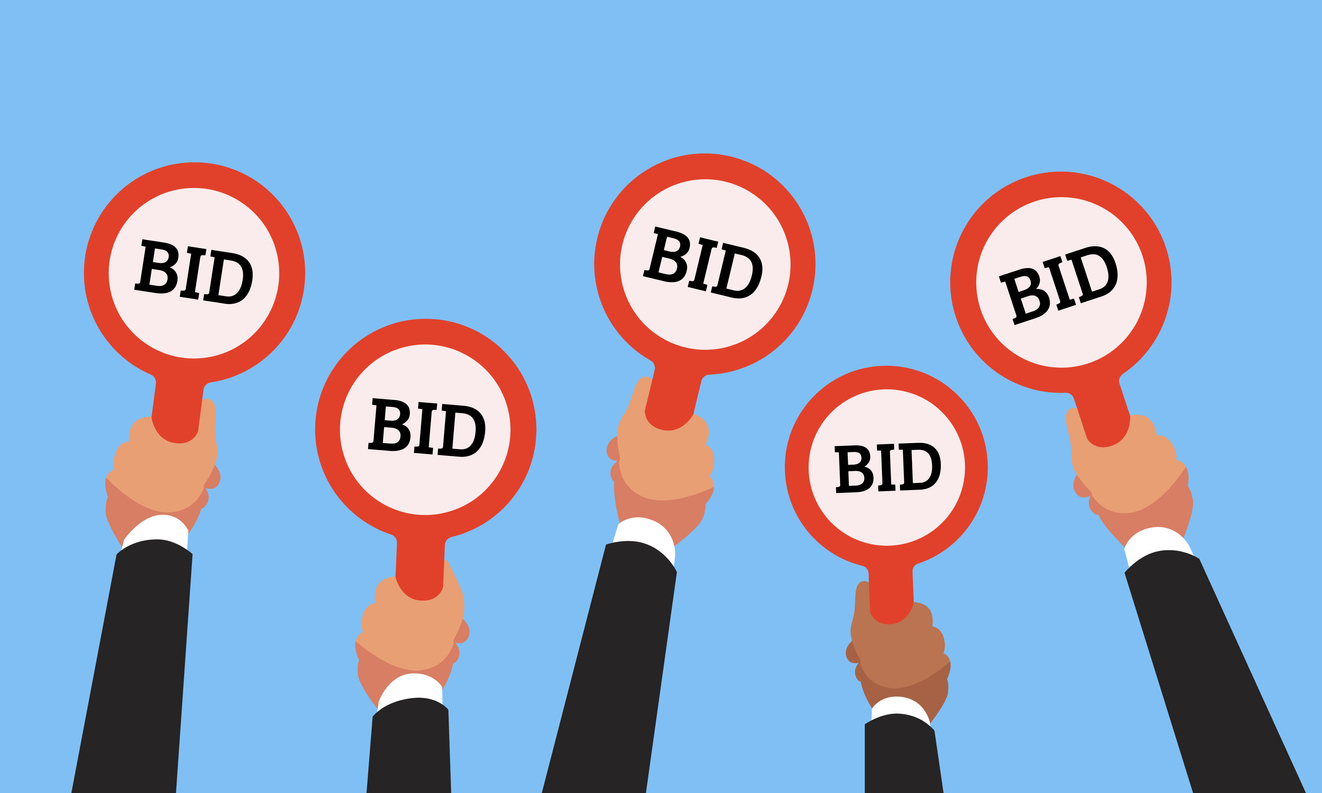 In this article we discuss what the best foreclosure auction bidding strategy is, depending on the situation.

The best way to know how to bid effectively when you’re buying a house to flip at a foreclosure auction is to study what not to do.

Do not get involved in the bidding on a particular house too early. Holding off for a round of bids or two will allow you to feel out the crowd’s interest in the property. You can observe the personal styles of each bidder and whether they’re being aggressive or slow to raise the bid. This allows you to figure out ways to bid against them.

Secondly, avoid bidding war’s at all costs. When a bidding war erupts over a property, it is possible that one of two things may be happening:

b) The bidders are being foolish and letting emotions drive their decisions. They are bidding based upon uncalculated decisions and simple one-upmanship.

c) The bidders have a much longer time horizon to earn a profit (i.e. they’re not looking for a quick flip for a profit, but potentially viewing it as a long term rental property investment)

Lastly, know your limit and hold yourself firmly to it. Write your limit down on a piece of paper and keep looking at it throughout the auction to ensure you do not let your emotions get the best of you.

If you’re investing in a house to flip at a foreclosure auction, using these specific bidding strategies can help you buy the right property for a favorable price. You can use these to get an edge on your competition and come out the winning bidder at the right price.

Throwing your fellow bidders off with unexpected behavior can be a sneaky way to take control of the situation, and perhaps win the auction.

One tactic is to call out your bid in increments, rather than calling out the price. For example:

By doing this, you will slow down the pace of the auction. The auctioneer must add your increment to the price before calling out the next price. Other bidders will need to add your incremental bid amount to the current bid and figure out if it’s over or under their desired bid. This can cause an otherwise confident competitor to back out.

Another foreclosure auction bidding strategy is to start out aggressively early on by upping the initial bid by a large percentage. This establishes a strong presence for yourself and immediately eliminates unmotivated buyers. Rather than the bidding building momentum, getting “hot” and driving up the price, a high initial bid causes other bidders to take a step back and consider if they want to participate.

If there are other strong, experienced foreclosure auction bidders willing to pay $545,000 or above, this will force them to take action early. The price may ultimately go beyond your limit, but you’re likely to be bidding only against a few disciplined buyers who won’t overbid.

One caveat with making an early high bid: Don’t make an aggressive bid, then get cold feet and pull out of the bidding if the price goes above your initial bid. Other bidders at the foreclosure auction will quickly figure out that you’re not as strong a buyer as your behavior suggests, and they will just bid slightly above you knowing you won’t outbid them.

Another pointer: Only bid aggressively if there are a lot of buyers in the room. If buyers are sparse, this means demand is low and you should be bidding low.

In a scenario with few bidders at the auction, it can pay to make a lowball first bid.

This does two things:

First, it encourages the price to stay low. The auctioneer’s job is to find the best market value for each property. If he calls out an initial price, this does not mean this is the price people are willing to pay, and he will adjust downward if need be. Your lowball initial bid tells other bidders that the property may be mis-priced and they might hold off. It also tells the auctioneer that he may have misjudged the market, and needs to adjust down.

Second, if the auctioneer rejects the bid, you know the owner is not willing to accept anything less than the called for price, and you have a better understanding of what is expected.  You can always bid higher again later.

Pay close attention to the body language of fellow bidders, and the auctioneer’s. The attitude and intention of a bidder can be revealed by their posture, the speed at which they bid, and consulting with another person.

For example, when a bidder is getting close to his limit he will pay full attention, and will not speak with anybody else (unless he’s representing another buyer he’s talking to on the phone). He will also tend to take longer to call out his bid, and may hesitate for 10-20 seconds. He may have a concerned look on his face. He may shake his head or make odd facial expressions. He will often look down (to figure out if the property is really worth it) or directly at the auctioneer (unconsciously seeking approval).

Conversely, foreclosure auction bidders who are not close to their limits tend to have a more relaxed posture. They will bid quickly and frequently, matching and raising bids by sizable increments. They will look around the room at other bidders to gauge and analyze them while they let the price run up. These parties will often be in the top 2-3 bidders at the end.

When somebody is reaching their price limit, it’s fairly easy to knock them out. A late bid 2% higher generally does the trick.

When somebody is not near their price limit, beware. Entering the bidding at this point can take you on a ride and show your hand. It’s best to see where the price goes and when things slow down — if it’s still in your price range — make a strong bid.

As far as the auctioneer’s body language, it is most effective if you attend several auctions with that auctioneer. This helps you understand their speed and how they work the room.

If the auctioneer pulls a property at the last moment or states an initial bid price and gets no bids, then you should approach him later and ask why. He may give you valuable information about the property that you can take advantage of. For example, if the homeowner has gotten a temporary stay, or the bank agreed to a short sale. In these cases, you may be able to approach the bank and offer a low price to take the property off its hands outside the auction arena.

In this article we covered several bidding strategies you can use to increase your house flipping profits. It’s up to you to decide the best foreclosure auction bidding strategy and use it for your benefit.

< Back to Flipping a Foreclosed House | NEXT: How to Flip REO Properties?