Foreclosure Auctions – Does a Quitclaim Deed Give Clear Title? 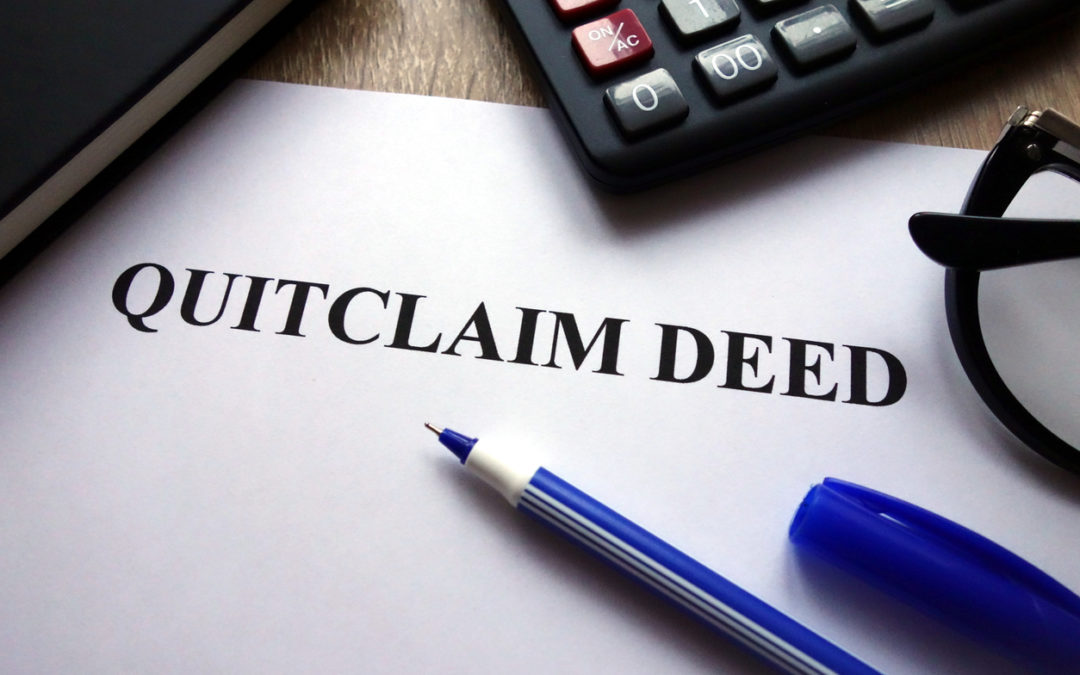 So you are about to complete the purchase a property at a foreclosure auction and have been given a quitclaim deed for the title. But is it a clear title?

What is a Quitclaim Deed?

A Quitclaim Deed is a commonly used instrument for transferring titles. This deed is sometimes mistakenly called a “quick claim” deed. Many types of deeds will convey title to real property, but their best usage depends on the situation.

Only Certain Defects Will be Cleared

What is cleared by a Quitclaim deed after a foreclosure auction:

Only certain title defects will be cleared by the quitclaim deed and will be backed up by the court. These include:

What is not cleared by a Quitclaim deed after a foreclosure auction:

No warranties, guarantees, or assurances are made with a quitclaim deed. It promises no clean title, or even ownership upon sale. If there is no marketable title found after the sale, the buyer cannot sue the seller.

The “Subject To” Clause in a Quitclaim Deed

Warranty Deeds and Special Warranty Deeds include language discussing a guarantee of the title’s condition. This means that all current claims have been disclosed at that point.

A Quitclaim Deed has “subject to” wording that includes certain items as being a part of the transfer. Any liens that are recorded in the public record come with the deed.

In fact, the deed may not state that the property is in any way “free and clear”. It is up to the grantee to know if a lien on the property exists.

If purchasing a title insurance policy, the title company will likely do a complete title search. All issues with the title will be listed in the “Schedule B” section of the title commitment.

Since a quitclaim deed does not guarantee anything, a grantor may be seen as having hidden something if a quitclaim deed is spotted in the chain of title by a title officer. In real estate transfer scenarios, there are multiple parties involved and they want the process to happen as speedy as possible. A quitclaim deed could still mean the title is not clear and this will lengthen the the time that new owners can move into a house.

A Special Warranty Deed may be a better option for those who have nothing to hide and can be used in most states.

Buyers should protect themselves from the risks of Quitclaim deeds after a foreclosure auction by purchasing title insurance. This guarantees that no problems with the title will occur that are not covered by insurance.

The title insurance company will run the title search for the buyer and for a fee write a policy insuring the property. Since the title company is very good at making sure that titles are clear before they issue policies, there will likely not be a problem with the title for the transferee (the buyer).

In other states, however, title insurance companies have no problem writing title policies on properties. A title will only be cleared by a quitclaim deed if it is given by the party that is the cause of the cloud on the title. So, if a cloud exists on the title, getting a quitclaim deed from someone who is not the source of the problems will not remove the cloud on that title.

Many states will only allow quitclaim deeds to transmit clear title as long as the transferor (the seller) had clear title at the time of sale. This means the transferee (buyer) does their due diligence to find out of there are no claims against the property they are buying.

A title search is the way to find out about any recorded liens or encumbrances. Thus, whether the transferor (seller) had clear title and whether the title companies within the state of sale handle quitclaim deeds as valid conveyance will determine if a quitclaim deed will convey a clear title.

It is up to the buyer to do a complete title search to find out if any clouds on the title exists, or have a title company do one for them. Make sure to read all the fine print in all documents before proceeding in a transaction.

If needed, consult a legal or real estate professional to determine if a quitclaim deed will give you clear title for a foreclosure auction property.

< Back to Flipping a Foreclosed House | NEXT: What is the difference between a courthouse vs. online foreclosure auction?